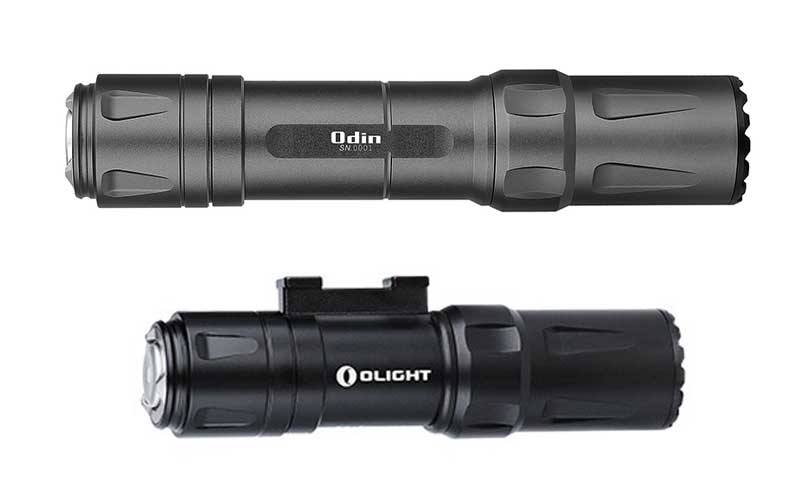 Two favorite rail-mounted weapon lights, let’s see how they compare and when one might be more useful to you than the other

Earlier this year we put the Olight Odin Mini through the testing gauntlet. It performed exceptionally well but lacked some of the features often seen in other high-end lights from Surefire and Streamlight. We just recently got our hands on the Odin, the bigger brother and Olight’s first foray into rail-mounted lights earlier this year.

Update: Olight is having a 40% off sale right now on the Odin!

The Odin pumps out 50% more lumens, has a unique vibration feature, and has a bigger battery making it clearly the alpha male when compared to its little brother.

Similarities between the Odin and the Odin Mini

Both lights are aesthetically pretty similar with the Odin being a bit bigger and heaveir than the Odin Mini. The tail cap, rail mounting point, aluminum body and LED are the same on both models, and they both have an AR coated glass lens, making the light very clear from both of the lights.

Both lights charge the same way, through Olight’s proprietary MCC magnetic charging cable. I have had nothing but great experiences with this charging method and think Olight has done a great thing here – Im hopeful other flashlight manufacturers will do the same.

The pressure switch works really well on both lights and snaps and locks into place the exact same way on each of the lights. I also believe Olight has released color matching pressure plates as well.

Neither light comes with a pocket clip and they have a rail-mounted piece bolted to the body of the light which makes it less than ideal doe pocket carry.

Differences between the Odin and the Odin Mini

When it comes down to it the output from the Odin is substantially brighter than the output from the Mini. The battery is also more than twice as big and will last much longer in the Odin – potentially making it more suitable for long term operations or circumstances in which you need a brighter light for a longer duration.

The Odin also has a unique vibration feature which feels similar to the haptic feedback you get on a mobile phone screen. The purpose of this is to tell you if the light is on/off or to communicate the batter level. This feature seems useful when the light is being used in your hands but seems less useful when mounted to a weapon as you won’t be able to feel the minor vibrations through the weapon or while you’re concentrating on more important things.

This compact version of the popular Olight Odin is perfect for CQB and other up close and personal operations.

Pumping out 1,250 lumens and the included pressure plate, make this light one hell of a deal. The ultimate rail-mounted light, capable of an astounding 2,000 lumens.

The Odin is Olight's first venture into weapon-mounted lights and they have made quite the splash with the Odin.